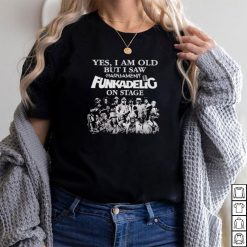 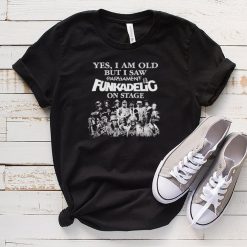 Category: Trending Shirt Tag: Yes I am old but I saw Parliament Funkadelic on stage shirt

The Yes I am old but I saw Parliament Funkadelic on stage shirt depressing bit is that there’s plenty to go around for everyone to live a decent lifestyle, especially in the “first world” nations. There’s no reason for anyone to be deprived of enough food, a small shelter, clean water, decent medical care, and even some basic creature comforts. Sure, it might not be in a place that people necessarily “want” to live, but it’s weird to me that we’ll pretty much build exactly that, except add in a bunch of bars, locked doors, guards, won’t let the people out, then call it a prison and justify putting people in there for shit that ain’t the government’s business.
Further, let’s do a little thought experiment… can you think of a single positive, moral action a theist would do that not a single atheist would do, ever? Yes I am old but I saw Parliament Funkadelic on stage shirt donate to charity. Atheists attend blood drives and fundraisers. Atheists chaperone school events. Atheists help and attend natural disaster relief efforts. Atheists put others before themselves. Atheists raise children and teach them basic morals like how it’s wrong to steal, or bully others.The typical theistic belief that atheists are innately immoral because we don’t believe in a deity, or in eternal punishment in the afterlife is not only wrong, and insane, it’s dangerous. Atheists have morals, and atheists have life purpose. Here’s a nice video showing just that, made by one of my favorite Youtubers, Godless Cranium.

Yes I am old but I saw Parliament Funkadelic on stage shirt, Hoodie, Sweater,  Vneck, Unisex and  T-shirt

I really, really enjoyed  Yes I am old but I saw Parliament Funkadelic on stage shirt. I thought that the whole way through it was extremely entertaining. Some parts were “better made” than others, but it was consistently engaging and that’s the most important thing for a piece of media. I didn’t laugh the movie for the most part. My buddy and I were making jokes the whole time, so we were laughing, but not reallythe film. Then a certain scene happened. Very light, vague spoilers.There’s a moment where a certain corporeal being turns up during an especially intense segment. That being begins running at a character. Then, that being falls and bangs its head incredibly hard on a table. Immediately, I uncontrollably burst into laughter at that moment. Not because it was , not because it was bad, not because I felt like I was better than the movie. No, it was just a genuine moment of “this thing that just happened was fucking hilarious”. Looking back, I don’t know if it was supposed to be funny. But goddamn, it felt like it was intentional to me. This wasn’t a “laughing at thing what’s supposed to be scary but isn’t because I’m too brave for it”, it was a campy, goofy, fantastic moment that made me genuinely appreciate the film so much more. It really cemented that movie as just being a fun ass time, even if it wasn’t as conventionally “good” as the two movies before it.
A stand alone German currency would be far stronger than the euro currently is.