‘On the evening before Christmas Day, one of the parlours is lighted up by the Dachshund Christmas Quilt Bedding Set, into which the parents must not go; a great yew bough is fastened on the table at a little distance from the wall, a multitude of little tapers are fixed in the bough … and coloured paper etc. hangs and flutters from the twigs. Under this bough the children lay out the presents they mean for their parents, still concealing in their pockets what they intend for each other.” The shadow of the bough and its appendages on the wall, and arching over on the ceiling, made a pretty picture, and then the raptures of the very little ones, when at last the twings and their needles began to take fire and snap! — Oh, it was a delight for them! Formerly, and still in all the smaller towns and villages throughout North Germany, these presents were sent by all the parents to some one fellow, who in high buskins, a white robe, a mask, and an enormous flax wig, personate Knecht Rupert, the servant Rupert. On Christmas night he goes round to every house, and says that Jesus christ his master sent him thither, the parents and elder children receive him with great pomp of reverence, while the little ones are most terribly frightened. 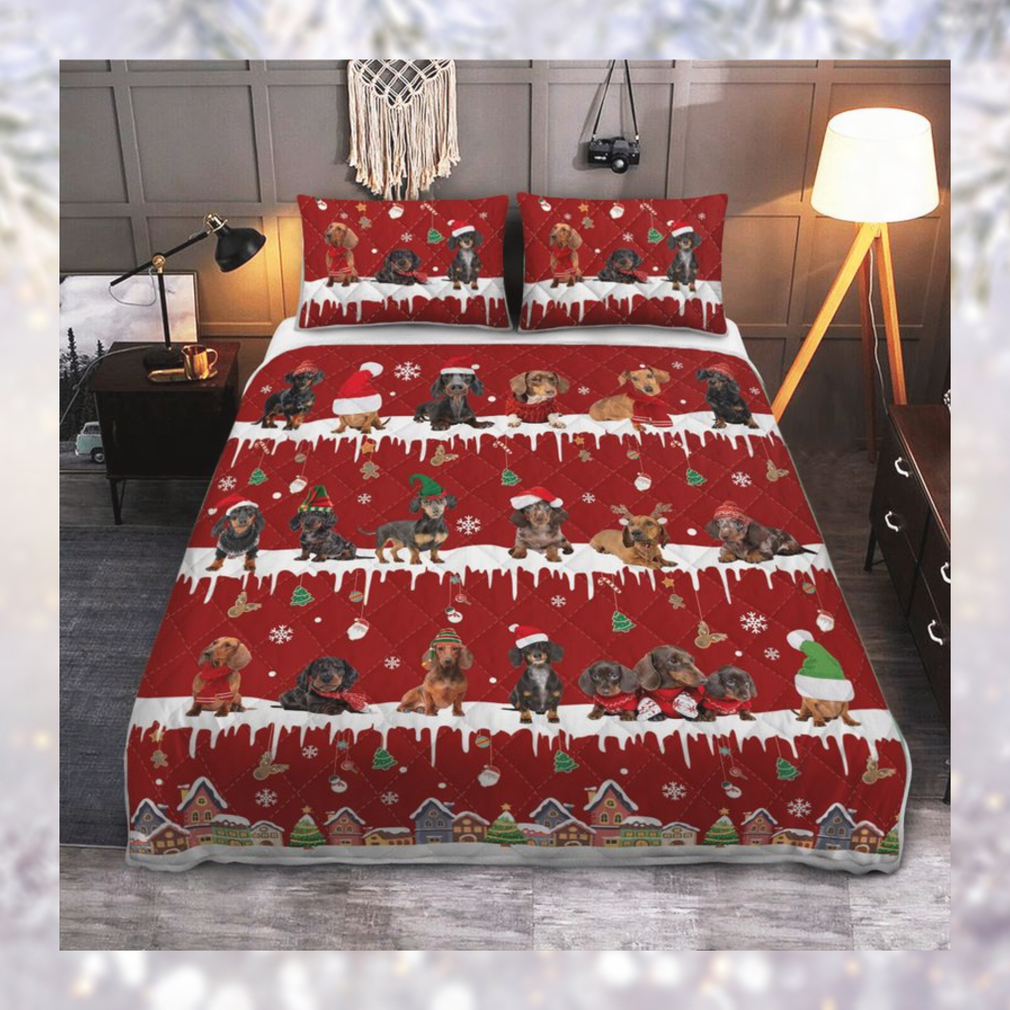 There was definitely a way with my children’s father. We celebrated holidays and birthdays as we always had done, including inviting my ex mother-in-law. I think the Dachshund Christmas Quilt Bedding Set was that there were enough people invited that it wasn’t just him, me, and the kids staring at each other. We’re also a family not noted for our drama; my mom couldn’t tolerate drama! We still do holidays together sometimes, even though the kids’ grandparents are all gone now, one child lives 1200 miles away, and another child has married and is always included with his in-laws’ family. (My new spouse and I are always invited to the in-laws’ gatherings as well; it’s a huge and friendly crowd!) My kids are in their mid-30s now, and they’ve learned to make holidays a cooperative effort as well, despite having some of the most complicated family structures you can imagine. The point is to make it about happy memories for the kids and not a time/place to rehash old wrongs.

In our house, my siblings and I had to wait until precisely 6 AM on Christmas morning before we could come downstairs and start opening our gifts. If we so much as stuck our noses past the Dachshund Christmas Quilt Bedding Set at 5:59, we were told to go back to bed for exactly one minute until 6. Mom and Dad had to have at least two cups of coffee down them before even thinking about allowing the rest of us to wreak havoc about the house. The gifts were arrayed around our artificial Christmas tree in the family room near the fireplace. My parents kept the gifts hidden until after we had gone to bed on Christmas Eve, deploying them around the tree then. (Guilty secret: I did catch my father assembling my brother’s new bicycle around midnight one Christmas Day. I peered over the banister after seeing a light downstairs and caught him at it. I never told him or my mother that I had witnessed the death of the Santa Claus legend that night, which we as kids firmly believed up until we were about 7 years old.) The actual opening of the gifts was fairly unremarkable. Clad in pajamas, it was first come first serve. The larger packages and unwrapped items such as bicycles were usually the first to go, while the cooler more valuable stuff in smaller packages were secreted under the Christmas tree. Mom and Dad exchanged their gifts at a safe distance away from our thundering hordes.